“I was﻿ wondering the same thing, there’s usually two bung holes, why not use them. Also, I don’t see the need for the vent, doesn’t air escape out the inlet? And why not use a smaller barrel if you’re gonna put a “reset” faucet in 1/2 down a 55 gallon barrel. Seems like if you use a 30 gallon barrel your “reset” and clean out faucet can be one and the same, at the bottom.”

As far as the vent issue; yes, the water will “flow” without a vent, but it will not be dependable, and will plug up constantly and become a real problem, I’ve been there and done that. I’ll explain in detail below.

I’m not an engineer, so I can’t give a complete technically correct explanation of why a vent is needed; however I can give an accurate explanation of what I observed, over and over again. If there is no vent, the diverter will overflow during a heavy rain event, and the slow drain will not be dependably adjustable. I built the first diverter without a vent and it did not work until I put a vent in it. It would act as if it was full when it was not (water would spill out over the top before the barrel was full), and the slow drain would not work. Then, I put a vent in the top of the barrel, and everything worked.

The input pipe is too small preventing air from escaping when water would flow in fast; or there was debris blocking the input. It is a fact that water will displace air when it flows into a sealed container. Also, if there is a float seal inside the input pipe, there may not be enough air flow past the seal to allow enough water to drain out slowly and still make room for enough air inflo to allow water to escape from the barrel.  This is because the float is a 3 dimensioal object and has a diameter. Water surrounds it completely and the forces it up against the beveled inside surface of the pipe. In a 55 gallon barrel, this amounts to a cylinder of water that is 1.5 inches high minimum if a ping pong ball is used as the float seal ( assuming the barrel has a perfectly flat top which most do not – they are curved upwards on the inside. That works out to 2 and a half gallons of water pushing up on the float device. That means the slow drip has to let out over 2 gallons of water with no where for air to enter as the water drains. It won’t work. The slow drain plugs up. A similar situation happens if just a y is used. The water backs up to the y output pipe so there is still air flow problems inside the barrel because of the water above the opening in the barrel.

This is the second comment regarding the barrel size, and using the pre-existing threaded holes on barrel.

Let me elaborate and explain. The diverter I show is by no means the “only” way to build a rainwater diverter, and all the suggestions are appreciated. I did not explain enough of the “whys” in the video, just the “hows”.

The vent is a must, particularly if a float seal is used. If the diverter is to work without problems, it must be airtight except for the vent; otherwise it leaks wherever there is an opening. The float seal “seals off the input” this effectively seals the barrel airtight, and keeps fresh runoff from mixing with the more toxic first flow water. Once the barrel fills, the slow drip drain will not work correctly; it will “drain” but will difficult to adjust. I’ve already tried adjusting the slow drain without a vent in the barrel. It is not consistent enough to be dependable.  If the barrel is not air tight the float seal will not work. So, the barrel must be airtight, and there must be a vent. In a very heavy rainfall, flow into the input will be unacceptably low, if there is not a vent, because there is no where for the air inside the barrel to go except out through the same place the water enters. The vent is necessary, but it does not have to look like the one I have. If anyone has built a diverter without a vent, perhaps they will post a link to the video here. This would be most helpful to others building their own diverters.

Yes a smaller barrel would work, if you can find one, that is. We used what was available, inexpensive and reusable. Also, having some of the unfiltered water from the roof is necessary here in the summer. We often get 3 or 4 weeks without any significant rainfall and water must run through the slow sand filters we feed from the diverters. The unfiltered water from the lower part of the diverter is used by mixing it with recirculated water in small amounts ( 1 cup of unfiltered water to 5 gallons of filtered water) This supplies food for the schmutzdecke, as we recirculate water through the filters during dry months. If you’re not using a slow sand filter, then you probably don’t need that extra water; it will just go stagnant any way, so a small container might be a better choice. Keep in mind that the amount of “diversion” you need is totally dependent on the roof size, and the surroundings. Here, in the forest, we have huge amounts of nasty stuff on the roof and need at least 15 gallons of diversion per 100 per square feet of roof surface directly under trees. We have huge trees, and lots of critters – they really mess up the roof surface. See the trees in the image below. 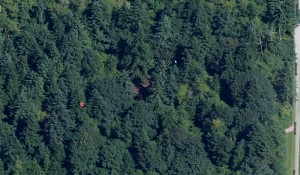 lots of trees around the location. Most of these trees are over 100 feet tall. The house is in the center of the image.